A turbulent tale of a secret love shared between two sisters and one man set in the seafaring community of Andros, Greece, during the 1930’s. Suppressed feelings are later rekindled and cruel games of fate reveal secrets, leading to devastation.

Following the death of their mother, two brothers undertake an odyssey from Athens to Thessaloniki in search of the father they have never met, in this wry and affecting road movie from Greek director Panos Koutras

For many years, Nadja has worked as a housekeeper for an upper class Greek couple and their daughter. She’s allowed to feel like part of the family. When she’s diagnosed with a serious illness, and the man of the house runs into financial difficulties due to the economic crisis, Nadja loses her job. Yet she shows no external sign of how these two traumatic events have affected her.

Stratos is a man trying to find redemption in a decadent world, where morals and personal boundaries have been replaced by money as the only value. After years in prison, he now works in a bread factory – and as a contract killer. With the money, he wants to help his friend who once saved his life. He always pays his debts, but he must learn that the price is higher than expected.

Zano arrives in the big city for the very first time. The year is 1984, and Athens beckons. A vampire and a fine dancer, all Zano wants is a “warm girl”. Lured into their shady shenanigans, Zano, a prostitute, and a Norwegian drug dealer traverse mountains and descend into the core of the earth, finding the Kingdom of Mathousalas.

Two Athenian attorneys pursue litigation for the return of the Parthenon Marbles. Just as the bronze statue of Athena Promakhos used to stand guard in front of the Parthenon, they both must find the courage to stand in defense of what they love.

Athens, Greece, today: 32 hours in the life of Stelios Dimitrakopoulos, a small time night-club owner in Athens, who struggles to salvage his bankrupt business from loan-sharks, while the city and the whole country go up in flames.

A Family Affair is an intimate portrait of the famous Xylouris family and their sacred bonds with the musical tradition of Crete. The film follows three generations of family musicians who uphold and pass on the vibrant tradition of Cretan music, performing ceaselessly to followers across the world.

The Agorá was a central area in Ancient Greece city-states. It was a gathering place, an assembly of active citizens, and the City centre for political, economic, athletic, artistic and spiritual life. It was the heart of democracy. In modern Greece the word Agorá has lost its initial sense and it has come to denote solely the place and act of commercial transactions. It is a dominant word in the reality experienced today by Greeks, as the country goes through an economical vortex that devours human lives in its path.

In Angelo Tsarouchas’ latest one-hour comedy special, he does what no other westernized comedian has done before- he goes back to his ancestral home to perform in front of a sold out audience in Athens, Greece. “A Night In Athens”, takes you on a hilarious ride as Angelo shares many of the challenges he faced growing up Greek in the diaspora. Those experiences have shaped who Angelo is as a man and as a comic. ‘A Night in Athens’ was recorded live while Angelo was in Greece filming a documentary on his life titled ‘Back to Sparta’.

Secret journals document the atrocities and the true life stories of the women caught up in Greece’s tumultuous Civil War, fought in the mid 1940’s.

The untold story of the Greek Holocaust. History records an 87% loss of Greece’s Jewish population as a result of the Nazi atrocities of the Second World War, and yet the experiences of these once dynamic communities are not widely known.

In MEDEA: LOUDER THAN MY THOUGHTS, the text of the play Medea, by Euripides, is the project’s raison d’être. In a magical way, it becomes the discovering climax of the focus for the film. The story of Medea, with its unique force, acts as a channel through which we enter into a thrilling and unpredictable quest, trying to find lost signs and meanings.

The life and work of the patrician artist Panagiotis Tetsis, who helped establish contemporary Greek painting of the 20th century, is highlighted and celebrated in this colorful documentary.

Medea kills her kids. Despite being recycled through a myriad of versions since antiquity, this subject has lost none of its everyday and brutal topicality. Script, sound, and dance join forces in a powerful film that reflects the desperation of a society that spent all past efforts turning its children into those who have become today’s lost generation.

Through a fluid storyline, etching out the shaky outline of his grandfather’s unconventional life and unexpected death in rural Greece, the artist is also discovering parts of himself and sharing his reflections on both their identities.

Athanasios, a mischievous, 21 year old Greek American, lives and works with his grandfather, a Greek immigrant, in the family shoe repair store. Through the telling of his grandfather’s survival of the Kalavryta Massacre in 1943, Athanasios realizes and appreciates his heritage.

Thirty-year-old Liam, pervaded by a feeling of childhood nostalgia, takes a trip in time, through his phobias and memories, to find his true identity and his Utopian past.

A young love between a boy and a girl in elementary school turns into a heartbreak when their family dramas end up affecting their sensitive interaction.

A lonely, obsessive moviegoer develops complicated feelings for a female stranger who he feels to be a kindred spirit.

A crew of teenagers from a Parisian suburb have to attend their Citizen Day at the military base in Versailles, but one of them, Chris, is turned away for arriving too late. Chris wants to go straight back home, but Momo, the hood’s “loser”, convinces him to spend the day with him at the Château de Versailles.

Those who eat their fill speak to the hungry of wonderful times to come.

On the last night of August, Nikos will make love for the first time. When September dawns, Maria will start her new life.

While seeking their identity, two high school students will inevitably test each other’s boundaries through violence.

A young South Asian woman living in London is forced to undergo sex-selective abortion against her will.

Following a mysterious phone call, a woman grabs a kitchen knife and sets out on a journey to an unknown destination, leaving ‘her life’ behind.

A modern take on the Greek myth of Narcissus set in the fashion industry.

On the eve of an escape from his abusive father, Jacob enters the world of “The Noir Project.” The comic story that he designed in his spare time, and the characters, which reflect the morbid reality in which he lives, predict, in a strange way, the events that will follow that night. 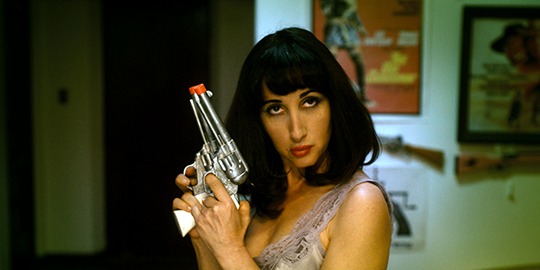 Olga is a postal worker who lives in her imaginative reclusive world of Spaghetti Westerns and the whimsical life of bugs. Her self-created universe is interrupted one night when she discovers that a suspicious “peeping Tom” lives across from her.

When a star falls from Orestis’ bedroom ceiling, he makes a wish for what he misses the most: That his parents lose their jobs and stay home with him. But the stars keep on falling. Can this story last?

A look at the Armenian genocide through the lens of a father desperately trying to protect his daughter from the deportation being forced upon them by Turkish soldiers.

A mother and daughter start out from downtown Athens and head to the northern suburbs of the city. Nina thinks she’s just going on a walk…

In the heart of the summer, in the midst of the tropical heat, the giraffe’s heartbeat is no longer heard, and the animals are thrown into confusion. As they search for this beat, it is then —when the strangest things happen.

“II” symbolizes parallel lines struggling to meet. Sometimes they do, but this only happens without awareness. “II” is desire drawing the line upon which the characters are trying to balance, treading in a world that is not.