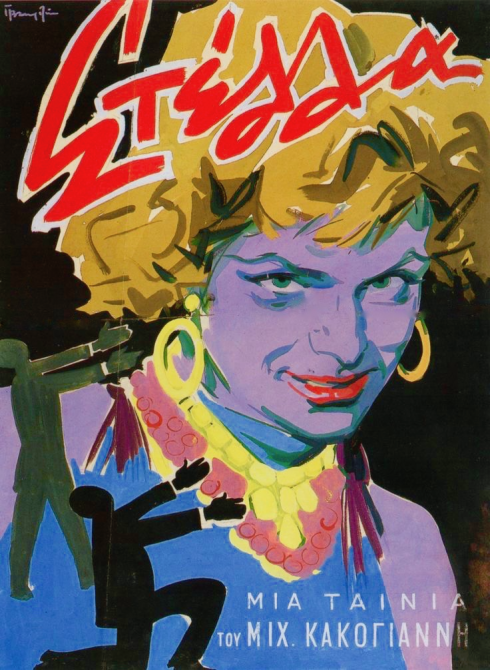 “It was “Stella” which established Melina’s reputation,
and made her the “Melina” we all know.”

Proudly brought to you by: the MERCOURI FILM PROJECT

Greece, 1955. Film director Michael Cacoyannis perfectly casts (then) stage actress Melina Mercouri in the title role of his film, “Stella”; a fiercely independent and uncompromising young Rembetika singer who sings “all the songs of life, love and death that mirror the soul of the Greek people.”

Ms. Mercouri explodes onto the screen playing the chanteuse, who lives a guiltless and pulsating, albeit turbulent, life. The embodiment of female emancipation, Stella revels in her numerous passionate love affairs, whilst headlining nightly as the star of the local Paradise club. Until she meets a dynamic soccer player, Miltos (Giorgos Foundas), and instantly severs her romance with the wealthy Alekos (Alekos Alexandrakis). Stella and Miltos define screen chemistry, with the most provocative love scenes of their time. Miltos proposes marriage, but Stella refuses, insisting she merely wants to sing, dance, and have all the men at her feet. Stella values her vibrant freedom above all else, even, his love.

When Miltos finally forces Stella to agree to marry, Stella leaves him stranded at the church, despite his warnings against her if she doesn’t submit. This predicament is sure to end askew, as the two are equally headstrong, and neither, as we tragically learn, is “cut out for half measures”…

In “Stella”, it seems, Mr. Cacoyannis has taken the Greek political motto, Ελευθερία ή θάνατος (Freedom or Death), and transposed it onto a young woman’s life in 1950’s Athens. A controversial and insightful paradigm that speaks volumes on women’s independence, and earned the film master a Palme d’Or (Best Film) nomination at the 1955 Cannes Film Festival, and a Golden Globe win for Best Foreign Film.

“Stella” also saw Melina Mercouri nominated for Best Actress at the Cannes Film Festival, and gifted her the perfect launching pad from which to catapult her magnificent film career. She went on to work with co-star Giorgos Foundas and maestro Manos Hadjidakis again in the film “Never on Sunday” in 1960, and director, Michael Cacoyannis in the New York City stage production of “Lysistrata” in 1972.

“This year is the 100th anniversary of Melina’s birth,
and it is an appropriate time that we recognize
the contribution she and the film “Stella” made towards enhancing
the role of women in Greek society,
which at the time placed women as second class citizens
and subservient to the whims of their menfolk.
The screening of Stella in Greek cinemas
started to challenge this traditional view.”

“Melina (Mercouri) and I scarcely ever talked about her film and song career. My relationship with her was centred on our personal connection of aunt and nephew. As I grew older she became increasingly focused on politics, and that was always the main serious topic we used to talk about with each other.

What I will say is this. To my personal knowledge, Melina’s interest in Rembetika was absolutely real and serious, and was matched equally by my father’s (Mr. Spyros Mercouris), and remained a constant throughout her life. I should say that in the 1950s  Rembetika were something deeply frowned upon by upper class Greek society – of which of course both Melina and my father were part – and for members of the upper class to take an interest and attend the venues was something disapproving of and seen as a form of ‘slumming’. That Melina – an upper class woman from a very upper class family – should actually act in a film as a Rembetika singer was beyond shocking for upper class society, and would have resonated very strongly with the Greek people.

Of course the whole topic of the film – a liberated woman with a mind of her own, murdered by her ‘husband’ – would have been shocking as well to the Greek upper class, and would have been incredibly daring.

I cannot imagine any other woman in Greece who would have been able to pull it off to the same degree in the 1950s. I would add that if the same film had been with a more lower class actress, it would not have had anything like the impact which it did. In a sense, as far as the Greek people were concerned, it was Stella which established Melina’s reputation, and made her the “Melina” we all know.

As I said, Melina and my father remained obsessed with Rembetika throughout their lives, though unfortunately Rembetika are now a shadow of what they were in the 1950s, as they have to compete with modern Western popular music and its Greek copies. However my father to my knowledge was still attending Rembetika venues right up until the 1980s at least, and so I believe was Melina.  By that point the shock value had long gone.

One thing I do remember Melina once telling me, said in answer to a question from me, is that it is the film of which she was most proud.  It was also my father’s favourite film of hers.

Obviously it was Melina’s first film, and it is also importantly a Greek film, made by the great Greek director Kakoyannis, and that would have mattered to her given her feelings for Greece.  However both the excellence of the film, and the courage required to make it, and its general importance for Greeks and for Melina herself, would have been important in shaping her feelings about it.”

*Courtesy of the MERCOURI FILM PROJECT